A young couple who lived near me were celebrating their wedding at her parent's house. The handsome groom carried some gifts to their car. It was parked in the street in front of the house. He was leaning over the open trunk when another neighbor, a 71-year-old woman, ran right into him with her car. He died there.

The woman driver was taking prescription pain killers and said she could not remember hitting anyone with her car. As the story unfolded in the press, we all learned that she had prescriptions for the same meds from three different physicians. She was addicted, caught in a web of deceipt, memory lapses, and difficulty with concentration.

According to SAMSHSA (Substance Abuse and Mental Health Services Administration), hospital admissions for problems with prescription medications rose by 96 percent for people aged 65 and over.

Older people are more likely to have prescriptions for joint pain, sleep problems or injuries from falls. On top of that, they suffer loss of loved ones and are often far from family. So they become somewhat isolated and the meds help their pain and depression. Sometimes they take more pills than they should because they can't remember when they took the last one.

We don't expect our dear older people to be drug addicts. But they can be. 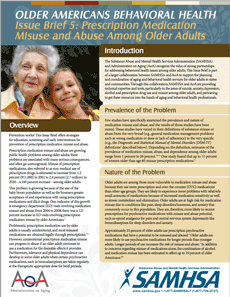 A Report Published By The Administration on Aging SAMHSA

There's a big bru-ha-ha in the press right now about use of narcotics by older people. "Use has been soaring since 2007" they say. Well, has anyone noticed that the baby boomers began retiring then? There are lots more of us older folks and even more to come. So use of everything we do is increasing rapidly.

Drugs for anxiety or depression or sleeplessness or pain are wonderful when we need them. Ever try to sleep on an arthritic shoulder? Ever lose your hair, your hearing, your best friend and your old dog in the same year?

Just the same, we need to be careful and responsible. It's really easy to get hooked on meds, needing more, cheating a little to get more. They make us feel so much better. If we can't remember where our shoes are, we sure do know the way to the drugstore. Time to wake up!